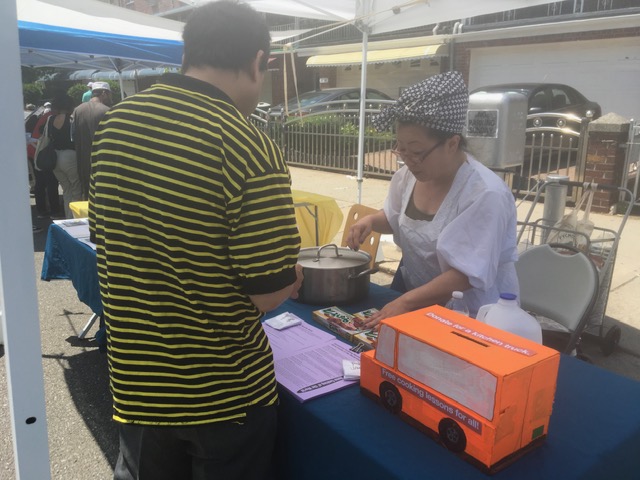 Thank you for stop by at the table on Sunday at Block Party of a New York State Senator Jessica Ramos. And thank you for all who donated for a kitchen truck. 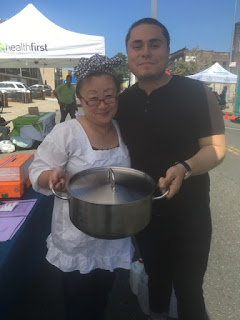 I didn't know how my message would resonate. Do anyone stop by and feel generous enough to give me 5 minutes to pitch? How many of them would be interested in cooking anyway? Would anyone chip in any donation? But it went far better than my expectation.

I love cooking, and curious about what other people are actually cooking and eating at home all over the world. You know, when Anthony Bourdain visited many different places, I was excited to see local people were cooking. It made me feel like I had a privilege to see the hidden parts of their lives. But wait, we can do it in New York, too! New York has so many immigrants from all over the world, and they often retain their background cultures in food they eat. New Yorkers with many different cultural background can teach cookings each other!

But there is a big problem of space. We tend to hesitate opening our kitchen to strangers. I once had a great fortune to be invited by a generous Indian lady to film her cooking. But it doesn't happen often. I don't want to rent a kitchen, because I don't want to charge for lessons. Also, I don't want this project to be another series of cooking class. This project's cooking lessons should be open for everyone so that more people would be interested in cooking and different cultures. 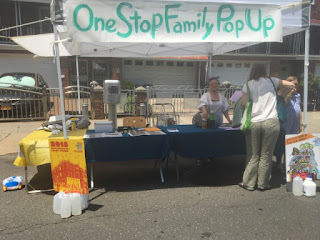 Then I thought of a food truck. A truck loaded with full kitchen equipment can go anywhere, and an instructor can teach 3 to 4 people at a time inside intimately. It may not be the most efficient and cost effective way to transmit the idea, but the participants can get the first hand experience by smelling the aroma, hearing the searing sound, seeing the glossy texture, tasting samples, and maybe by the accent of the instructor and demeanors. There are certain things media can't transmit.

The current big goal for me is to get a Fiscal Sponsorship, so that the project can get a nonprofit status. If it happens, I can apply for grans and get some tax benefits. I will report the result here. I am also in the process of setting up social networking outlets. I will report them as well as soon as they are ready. I attended Infirnity Block Party at Chelsea on Saturday, July 13. It was a pretty hot day, and I was happy to offer matcha electrolyte drink to rehydrate the attendants. A few people knew about matcha, but many tasted green tea for the first time. The opinions about green tea clearly divided. Some loved it and came back for more, but others couldn't finished the cup. The block party ended around 6, and we headed home. At Hudson Yards Subway Station, we were wondering why elevators and escalators weren't working. So we walked to Herald Square Station, and met a man walking towards us saying "The A, C, and other lines aren't running." Carrying suitcases and big bags, we decided to hail a cab. Within 5 minutes, we were on our way. When I got home, I saw a news and realized that we were extremely lucky. It was a blackout and we must have been stranded for hours, if we didn't make the decision soon enough. Thank you for everyone who stopped by the table. 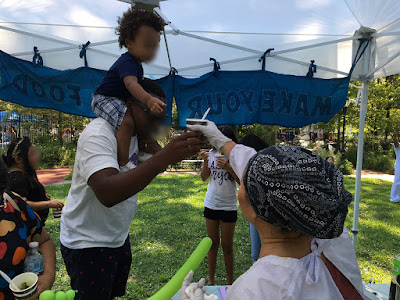 I joined Marion Street Park Block Party on a sunny Saturday, August 3, 2019 as a guest artist of One Stop Family Pop Up , along with members of Ile de Palmares capoeira group. I cooked Japanese curry noodle soup in the beautiful park, and provide the samples. One Stop Family Pop Up provided a lactation station, a changing table, and a play pen. Ile de palmares demonstrated capoeira angola, and instructed little ones. I chose curry noodle soup, because it's an easy one pot meal. Courageous residents around the block tried this foreign food for the first time, and many actually liked it! One of the girls came back for three times to get more. Yey! This area is mostly black neighborhood. One person who stopped by at the table told me that they were familiar with soul food, but not Japanese food. I am so glad that it was meaningful to provide easy to prepare Japanese home cooking demonstration and the recipe at Marion Street Park. I believe that everyone, particularly young 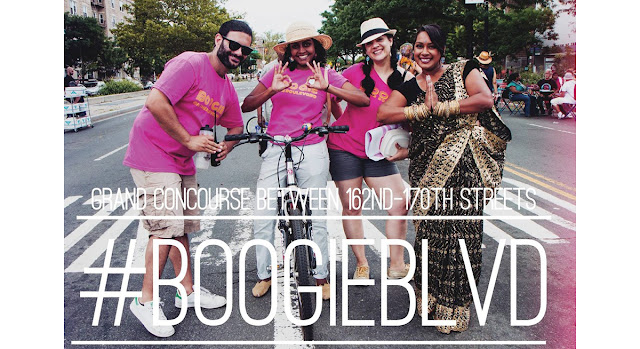 Come to Boogie on the Boulevard 2019, This Sunday

Sunday, September 15 from 2:00 to 6:00 at Grand Concourse between 162nd to 170 Streets in Bronx (closest subway stations: 161, 167, 170 stations of 4, B, D) Boogie on the Boulevard is a huge street fair in the Bronx, offering something for everyone! I am participating this event as a part of One Stop Family Popup, providing a free fun experience of making your own "onigiri," a Japanese rice ball. Yey! You can make a rice ball with a choice of ingredients!! I am preparing several different ingredients, including sweet and salty tuna, salty salmon flakes, Spam!, corn mayo. You can't miss this! After eating onigiri, make a reusable beeswax wrap and eat snack out of it. Infants and toddlers welcome. They can get fed and changed their diapers at One Stop Family Popup tent!